From Wikipedia, the free encyclopedia

(Redirected from Dick The Bruiser)

Jump to navigationJump to search

Born in Delphi, Indiana, he moved to Indianapolis when his mother got a job there during World War II. Afflis played football during his freshman and sophomore years for Shortridge High School in Indianapolis. After his mother lost her job, the family moved back to Delphi, and the high school there did not have a football team.[3] Afflis took up residence at the YMCA in nearby Lafayette, Indiana, so that he was eligible to attend Lafayette Jefferson High School where he played football and wrestled.[4] Afflis went on to attend Purdue University[5] and the University of Nevada, Reno,[6] playing varsity football at both schools. He also worked as a bouncer at a Reno nightclub.

Selected 186th overall in the 16th round of the 1951 professional football draft,[5] Afflis played football for the Green Bay Packers from 1951 to 1954.[7] as a lineman.[2][8] He appeared in all 48 regular season games the Packers played in those years,[9] although the team never finished better than fourth place.[5] Afflis suffered an injury to his larynx while playing for the Packers. This resulted in his trademark gravelly voice that he would keep for the rest of his life.[6]

Afflis started wrestling in Chicago in 1955 under the Bruiser moniker where he faced Verne Gagne and Lou Thesz. Gagne had trained him to become a professional wrestler.[5] From then into the late 1950s, Dick the Bruiser wrestled live every Thursday on TV in the Detroit area. His typical opponent was "an up and coming young (unknown) wrestler" who would be pulverized by the Bruiser. His matches and interviews were so effective he became a household name in the Detroit area. His only defeat on live TV was at the hands of "Cowboy" Bob Ellis. However, in two rematches with Ellis at the Olympia in Detroit, the Bruiser was victorious. In 1963, Dick the Bruiser was involved in an angle with NFL star Alex Karras to set up a match between the two. Bruiser was supposed to brawl with Karras at Lindell’s Bar, a drinking establishment co-owned by Karras and the Butsicaris brothers.[10] What was supposed to be a worked shoot turned into a real brawl when one of the Butsicaris boys’ uncles attacked Dick the Bruiser, unaware the event was staged.[11] Bruiser proceeded to destroy the bar as well a number of police officers who showed up to the melee; there were reportedly over 300 people hurt.[12][13] In the end, eight officers subdued him, and the Bruiser ultimately won the match.[14] At the end, he was charged with aggravated assault[15] and had to cover $50,000 in damages for two policemen that he injured during the brawl.[16]

On November 19, 1957, Dick the Bruiser and Dr. Jerry Graham engaged in a tag team match at Madison Square Garden in New York City before a crowd reported as 12,987 fans. Their opponents were Antonino Rocca and Édouard Carpentier. After the match ended, fighting among the wrestlers continued, and a large number of fans joined in, leading to a riot.[17] Two policemen were injured, two fans were arrested and over 60 policemen had difficulty dispersing the angry crowd. The floor of the arena was littered with hundreds of broken chairs.[18] As a result, Dick the Bruiser was banned for life by the New York State Athletic Commission.[5] 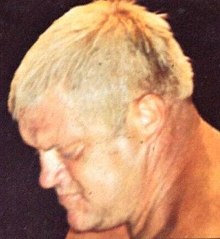 Afflis, along with fellow wrestler and business partner Wilbur Snyder, purchased the Indianapolis NWA promotion in 1964 from its longtime owner Jim Barnett. Afflis renamed the territory the World Wrestling Association (WWA) and promoted himself as its champion. While he ran it as an independent promotion with its own titles and champion, the WWA had a working agreement with the larger AWA (owned by wrestler Verne Gagne), sharing talent and recognizing their championships.[19] This agreement benefited both promotions and led to the Bruiser having five AWA World Tag Team Championship reigns, with tag team partner, The Crusher,[7] who was billed as his "cousin". The Bruiser was the first to christen Manager Bobby Heenan with the nickname of "The Weasel"[2] during his run in the territory. Afflis' WWA ran from 1964 until 1989, when he finally tired of losing talent, TV, and fan attendance to the World Wrestling Federation (WWF).

Afflis, with his charisma, NFL notoriety, and gravelly-voiced, tough-guy persona was a legitimate cross-media star, becoming something of a hero in the Indianapolis area.[20] He made his home on the northwest side of the city. Indianapolis native David Letterman (whose career would be launched by the Bruiser)[21] would later name his television show's band The World's Most Dangerous Band as a derivation of Dick the Bruiser's nickname, "The World's Most Dangerous Wrestler."[22] The moniker "Dick the Bruiser" was even used in the 1980s by George Baier, a co-host of the morning drive show on Detroit rock radio station WRIF. Baier's "Richard T. Bruiser" was an effective, entertaining impersonation of Afflis, who actually played himself in a number of popular TV ads for WRIF. After retiring, Afflis was a color commentator for the Gorgeous Ladies of Wrestling (GLOW), founded by David McLane, who had previously risen through the ranks as a teenager to manage the WWA for The Bruiser. He also worked as a talent agent for World Championship Wrestling (WCW), and was the special guest referee at the Starrcade 1990 main event between Sting and the Black Scorpion.[23]

His son in law wrestles as Dick the Bruiser Jr. in the independent circuit.[24]

Afflis died of internal bleeding on November 10, 1991, according to a spokesman for Suncoast Hospital in Largo, Florida, near his winter home. His widow, Louise, said her husband had been weightlifting at home with his adopted son, Jon Carney, and ruptured a blood vessel in his esophagus.[25] He was entombed at Washington Park North Cemetery in Indianapolis.[26]